Yukon River Drainage Fisheries Association’s (YRDFA) 2015 Education Exchange (the Exchange) was a success on all accounts. This year was the 12th exchange and an opportunity for five Alaskans to visit the Canadian stretch of the Yukon River, interact and learn more about First Nation communities, needs and cultures, salmon management in Yukon Territory and about some of the fishery restoration efforts supported by the Yukon River Panel. The nearly 2,000 mile road trip originated in Fairbanks, and paralleled the Chinook salmon as we all made our way upstream to the headwaters at Teslin Lake.

Starting in 1985 the United States (U.S.) and Canada engaged in negotiations to create a long-term agreement for the management of Chinook salmon and fall chum salmon spawning within the Canadian portion of the Yukon River drainage in the Yukon Territory. After 16 years of negotiations both countries came to a final agreement on how to share the salmon resource in March 2001. The Yukon River Salmon Agreement, implemented and overseen by the Yukon River Panel (the Panel), represents an international commitment to the restoration and conservation of salmon upon which Yukon River communities depend. Funded by the Panel’s Restoration and Enhancement Fund, the exchange has the goal of bringing together Alaskans and Canadians most deeply involved and concerned with salmon stocks, escapement agreements, the maintaining of native culture, diet and traditional connections to the Yukon River. All of these issues are intertwined, complex, sensitive and the Panel and YRDFA feel that bringing key folks together to discuss, hear and gain a better understanding of these issues is a key tool for educating, encouraging and supporting the decisions and sacrifices necessary for safeguarding Canadian stocks that are doing well and restoring Chinook salmon stocks that have been in decline.

Alaskan fishers traveled from their Yukon River home villages of Marshall, Huslia, Galena and Minto, representing much of the length of the river in Alaska and eager to learn all they could about the fisheries in Canada. The balanced but packed itinerary began in Fairbanks with the drive to Dawson City, Yukon Territory over the incredibly scenic “Top of the World” highway that connects eastern Alaska to Dawson City, accessed across the Yukon River by the small ferry George Black. Dawson, a beautiful little town on the banks of the Yukon exudes gold mining history, with wooden boardwalks, saloons with gambling and numerous tourists. But the many large tailings piles along the highway south of town gave our crew some indication and cause of concern about past and present mining effects on salmon spawning streams.

A visit the next day to the Tr’ondek Hwech’in First Nation Heritage Site’s beautiful and informative Danoja Zho cultural center was a most useful introduction to the rich history of the local native people and especially informative about their relationship with the land, water and animals of their region and the impacts and changes after contact with whites. Many similarities were obvious with the cultures of the exchange participants. Over lunch a wide ranging discussion with Tr’ondek Hwech’in First Nation Fish and Wildlife Manager and a local commercial fisher and biologist was salmon centric and helped address present issues around salmon escapement goals into Canada, present mining concerns and First Nation-Canadian Government relations. The afternoon’s boat ride with the story telling Tommy Taylor, owner of Fishwheel Charters, down the Yukon River past “Moosehide” the Tr’ondek Hwech’in’s traditional heritage site to his family’s fish camp was very instructive and humorous. His encyclopedic knowledge and obvious skills of traditional history, building and subsistence life of the area was truly a unique experience.

We drove to Carmacks on the following day, delayed several times by road construction. In many ways Yukon Territory is much like Alaska, for instance, like us, there are basically two seasons in Canada; winter and construction. We were warmly received by the Elders, Deputy Chief, administration and citizens of the Little Salmon/Carmacks First Nation for discussions centering on salmon, Department of Fisheries and Oceans (DFO) management, First Nation culture and other topics as mostly Elders shared their experience, one after another. We all felt honored to listen and gain deeper understanding and perspective from the stories and felt concern for their lack of fishing opportunity and sacrifices made in hopes that the Chinook salmon would one day return in abundance. That night we camped in small cabins at Coalmine Campground right on the banks of the swiftly flowing Yukon River after a visit to nearby Five Finger Rapids, a picturesque group of erosion resistant rock pillars blocking off two channels of the Yukon River’s flow.

Up early the next morning we headed further south that is upstream, along the north flowing Yukon to Whitehorse, Yukon Territory’s capital and largest city. We had arranged a meeting with the Canadian government’s DFO to discuss their management perspective, goals and approaches and after introductions viewed a most thorough power point on “Canadian Origin Yukon River Salmon” presented by DFO’s Nathan Millar. The presentation, covering distribution, assessment, fisheries and management was a critical element in helping our Alaskan guests gain a more in-depth understanding of the Canadian integrated approach to Yukon River fishery management. Mr. Millar did a great job covering fish distribution; run assessment projects-both past and current, some historical snapshots plus Yukon River Management stock assessments, plan development, the Decision Matrix, collaborative partners and long-term objectives.

After being hosted for lunch at Antoinette’s, a favorite local artisan restaurant we were whisked away to visit the Whitehorse Rapids fish hatchery and fishway and the McIntyre Creek Chinook Salmon Incubation Project. The Rapids hatchery is a mid-size hatchery for rearing Chinook salmon fry to compensate for the downstream migrating salmon lost as they pass through the turbines of the Whitehorse hydroelectric dam, built in 1958. Returning salmon are assisted in getting above the dam by the world’s longest wooden fish ladder: quite a sight. The McIntyre small-scale fry hatchery research project rears for release about 100,000-tagged fry to bolster Yukon River salmon populations. Alaskan’s where thrilled to see these projects and learn that projects for getting more fish into the river where underway and ongoing.

We drove next to Teslin for several days as guests of the Teslin Tlingit Council for their Ha Kus Teyea (Our Culture or the Tlingit Way) Celebration. This was the 4th bi-annual celebration bringing together Teslin, Taku River and Carcross Tagish Tlingit First Nations and we could tell upon arriving and seeing the many folks already camped out, the beautifully designed Heritage Centre perched just above sparkling Teslin Lake and the energy in the air that we were attending a very special event. We were honored by the care and planning we received. Wall tents had been erected with small woodstoves and a thick layer of sweet smelling spruce boughs layered for our sleeping comfort right on the shore of the lake and a traditional family fish camp. Beautiful traditional boats held races across the lake and gave us the opportunity to row and experience Teslin Lake from that perspective. Half a day was spent learning about Tlingit culture with a special tour to traditional family fish camps and the sharing of traditional foods. We were welcomed and interviewed on Canadian Public Radio, helped prepare fish for the second feast night and attended the various workshops and artisan booths. The hospitality, friendliness, dancing, singing and incredible food will never be forgotten.

I believe we were all deeply moved by salmon from the Taku River arriving by plane because of the Teslin First Nation’s 17 year, self-imposed moratorium on Chinook salmon harvests from the Yukon River in response to the long decline. There was some cheerfulness around the idea of “flying fish” and “our salmon come by air” but it was abundantly clear the deep sacrifice folks have made for so long. And, there was a message shared with us to carry home: Thank You! Thank you so much for the sacrifices being made the full length of the Yukon River. The return of Canadian origin Chinook salmon is in your hands. Gunalchish!

If you would like to go on the education exchange trip and you do not have a passport it is a good idea to get one if you can. This will enable you to apply to join us on future trips across the border! 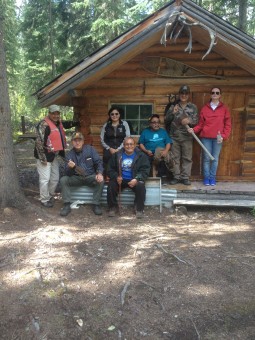